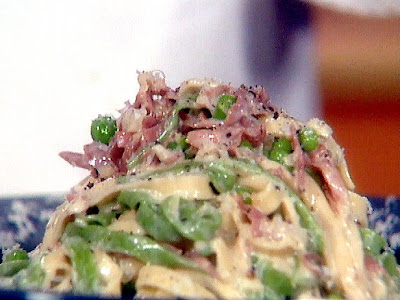 Once upon a time there was a glorious pasta dish at The Cheesecake Factory. Ryan and I would order it every time we went. We would order a large salad and Straw & Hay. It was a love at first taste and we could not order anything else. Such was our heart's devotion. Then the evil, wicked menu planner abruptly took it off the menu. Nooooo. "Can't you still make it?" "How did this happen?" We begged and pleaded for it , but alas, our villain made it impossible for us to order it. We were broken-hearted.

This story does have a happy ending, however, due to my diligence. I finally was able to get the recipe. Once it is off the menu, they are more inclined to release it. So the beloved pasta dish is once again available to us. Unfortunately, now I have to labor to make it but sometimes true love works that way.

Cook pasta separately. Cook peas with the pasta in the last few minutes. Drain and set aside.

In a large, heavy skillet, melt butter over medium heat. Stir in ham and mushrooms and cook until tender. Season with salt and pepper. Add cream and stir constantly until mixture thickens. Add 1 cup Parmesan cheese and stir until melted and smooth. Pour over pasta, stir until well combined. Top with remaining cheese. Serve immediately.
Posted by The rlmmmmcaress family at 5:20 PM

I have to say, "DITTO!" My fiancee and I also were crushed when this dish was removed. I have been looking all over for it because I want to suprise him on his birthday by making it. We loved this dish, Carribean Steak and the alcoholic drink, Fuzzy Peach from Cheesecake Factory and they ALL got removed. It was ALL we ordered and we were devastated. I thank you for sharing this recipe and I can't wait to suprise him! Ivonne

I still look for it on the menu everytime I go. If I can't decide on what I want when the waitress asks, I make snarky comments and lament its deletion from the menu, though this many years later they have no idea what I'm talking about.

Thank you!! I knew there was chicken sausage!! I worked for ccf in Boca Raton. 1994-97. My favorite. Bought chicken sausage tonight to try to recreate! Whew. Doing it by rememberance.

It was the best pasta!! I agree. It was made with chicken sausage I do remember that. I thought i had thinner noodles also.