Have you ever seen a show on the food network and then wanted to make it and then kept tweaking it because you didn't have the right ingredients and for some reason decided to go ahead anyway? Then the next thing you know you are adding all sorts of stuff just 'cause it sounded good? Then you serve it to others who act like you are their own personal hero for serving something that is so good? Then you tell them you got the recipe from the food network? Then you make it again and again and each time everyone loves it? Then someone on facebook asks for the recipe and you tell them sure and so in order to save the time typing it out you look it up from the food network to cut and paste and you realize that the concoction you created has nothing to do with the original recipe? So then you look all over the Internet and discover that no one calls what you made what you have been calling it? 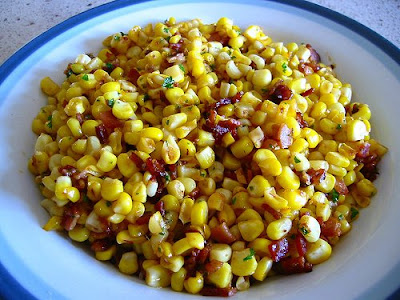 So here it is ... Lisa's Pot 'O Corn. Apparently, an original creation, even though I have been giving Paula Deen credit for years. I have only made it for big groups and this fills a large crock pot for a buffet. It will be tons too much to serve to a single family. So make your adjustments accordingly. I originally added the creamed corn because I did not have enough frozen corn. The sauce combined with the bacon tastes buttery even though there is NO added butter!

1 lbs of bacon, fried, drained (keep the drippings) and crumbled

1 onion, chopped fine
4 cans of creamed corn
1 cup grated Parmesan cheese
4 lbs frozen corn (I like a variety of white and yellow and fresh)
salt and pepper to taste

In a frying pan, add a Tbsp of the bacon drippings. Heat and add the chopped onion and cook until soft and golden. Put into the crock pot. Add the creamed corn, crumbled bacon, and Parmesan cheese, stir.

Add another Tbsp of bacon drippings, heat. Add 1 lbs of corn. Let cook until you can hear it kind of popping. Stir and continue cooking and stirring until you can see the corn is starting to develop a fried look - it should be brown, but not over cooked. Add that to the crock pot and stir.

Repeat with the Tbsp of bacon drippings and another pound of frozen corn. Repeat with the third and fourth bags of corn, stirring after each addition. (this has to be done in small batches so all the corn get an opportunity to have the fried texture.

Add pepper to taste. Don't over-salt because the bacon and drippings and cheese are salty foods. I usually don't add any additional salt.

Serve in the crock pot, on warm.
Posted by The rlmmmmcaress family at 1:09 PM