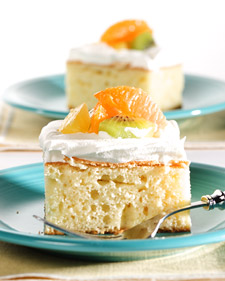 This is my favorite cake in the whole world. I first tasted it when I was teaching at Fenton Ave. Charter school where 98% of the students were of Hispanic descent. One day, to celebrate a birthday, a mother brought in what looked like an ordinary cake with lots of fruit on top. She offered me a piece and, being a true cake girl, I graciously accepted. I took a bite and almost died right then and there. The mother spoke no English, but somehow in that moment, language was transcended as I expressed that it was love at first bite. The next day she brought me my own - which by the way, despite my cake-lovers instinct, I shared with other teachers - and the business card to the bakery. It was the greatest gift I ever received as a teacher.

When I moved, I found other tres leche cakes. They had them at Walmart and Fresh & Easy (in the frozen section.) No, no, no. I am sorry but those were sorry excuses. I had a few homemade and a few from other bakeries. I was in trouble. Apparently I had eaten the BEST ever and would never find anything that was even close. Even the Martha Stewart recipe called for "frozen whipped topping." I mean how could anyone put anything but real whipped cream on this glorious creation. I couldn't even attempt the recipe because of that disrespectful overture. I ended up having to ask around. I got all sorts of answers to my pleading. Nothing was close. I finally asked a mom of one of my kid's sport teams where to get one. She didn't speak a lick of English and neither did the people in the bakery. It was divine. So my conclusion: The good stuff is a safely guarded secret by those who are completely fluent in Spanish bit don't speak more than ten words of English. I just don't trust anyone else.

Combine flour, baking powder, and salt in a large bowl. Separate eggs. Beat egg yolks with 3/4 cup sugar on high speed until yolks are pale yellow. Stir in milk and vanilla. Pour egg yolk mixture over flour mixture and stir very gently until combined. Beat egg whites on high speed until soft peaks form. With mixer on, pour in 1/4 cup sugar and beat until egg whites are stiff but not dry. Fold egg white mixture into other mixture very gently until just combined.

Pour into prepared pan and spread to even out surface. Bake for 35 to 45 minutes or until toothpick comes out clean. Turn cake out onto a rimmed platter and allow to cool.

Combine condensed milk, evaporated milk, and 1/4 cup heavy cream in a small pitcher. When cake is cool, pierce the surface with a fork several times. Slowly drizzle the milk mixture—try to get as much around the edges of the cake as you can. Allow the cake to absorb the milk mixture for 30 minutes.

Whip cream with sugar and vanilla until thick and spreadable. Spread over the surface of the cake. Garnish with fresh fruit (or maraschino cherries.)
Posted by The rlmmmmcaress family at 12:43 PM

Oh how I love love love your food blog stories :) Can't wait to make this!